A lot of information about the
weather

I became a ham radio member in 1991.  I always wanted to be a ham but I really could not learn the code. I am (was) Dyslexic and Attention Deficit Disorder. In the middle sixties I was a CB'er, I know nobody was ever a CB'er. I did leave it about 1968.  When the no-code license was available, I was one of the first to get my license. Now, I can't read or write but I did the code.

KB8AMZ -  Terry L. Morris, Lou Albert was one of my unique CW students. Lou is Dyslexic and has Attention Deficit Disorder. On May 4, 1995, Lou had a severe stroke, and was in a state of coma. Doctors diagnosed Lou's condition as "FLUENT" APHASIA. He could not speak, read, or write. Presently, Lou can speak, usually and sometimes he will lose words, colors, and ideas. I developed a system where Lou could identify elements of code by things that he (automatically) knew, e.g. - when I sent 'T' Lou would point to me (Terry), and when I sent 'L' Lou would point to himself. When we ran out of people's names that were familiar to Lou, flashcards were used (children's learning aid when learning letters of the alphabet). Whatever worked. Lou couldn't practice on his own, so I taught him CW 3 days per week for 5 weeks. I surprised Lou with a practice test at  the home of Ola - WD8MOU, VEC (Volunteer Examine Coordinator) with the assistance of Wayne - WS8RM. While enroute to Ola's, Lou was becoming nervous. At one point he attempted to convince me to turn around and return to Akron. I kept telling Lou that the test was for practice. Lou passed the test on his first try. I doubt that Lou will ever use CW, but at least he can bonifiedly say that he passed the CW code requirement (5 WPM) with his present disabilities.

This is a picture of my antenna "farm."

There are 7 antenna's,  from bottom:

This is my Amateur Radio Service, WA8PHD, and computer room! 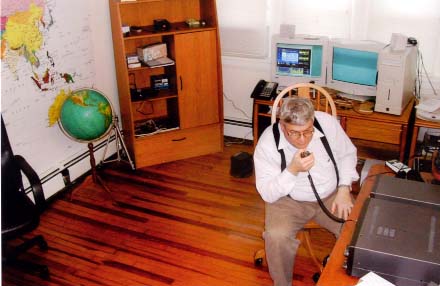 Many ham radio operators also use Amateur Photography
Any link with this font are my photo's at pho-tog-ra-phy.

Here is a picture of my Radios.

From  left to right:

All of us in this family are ham's.  Here is our calls:

"You never seen a ham operator before"
"They'regonna settle out of court, Herman," Jim Unger
These are some HAM friends I know:

Some local clubs in the Akron - Cleveland Area.

I have exchanged links with other people and/or interesting pages!

Here are some more links.

This are some of the all encompassed group on ham radio!

As A "Ham" you may need this some day!